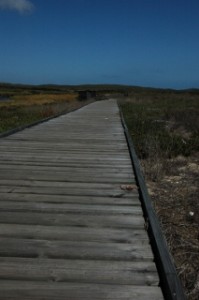 When we prepared for our trip we tapped into the Overland Community. There were many people who helped us with information, but particularly patient were Langebaan Sunset. So, after collecting Brodie in Cape Town we invited ourselves to visit Langebaan Sunset in – yes you guessed it – Langebaan.

Confirming directions we discovered that it is possible to follow the R27 up the coast and enter Langebaan via the West Coast National Park. Armed with our camera, a pair of old binos and the Wild Card we set out. 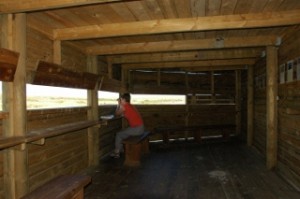 The West Coast Gate to the park, which we used as our entry point, is located just off the R27 and is well signposted from both directions. At the gate we were met by a friendly warden who took our details. As he opened the gate for us he also handed us a very useful map of the park where all the bird hides and look-out points were marked. Such a contrast to the map-less parks we had visited in Senegal…

Western Cape NP stretches along the west coast of South Africa just south of Langebaan. It is mainly low shrubland based on sand. The park also incorporates the Langebaan Lagoon which adds a marshland area. The Langebaan Lagoon was recognised as a Ramsar wetland area in 1975 with the Park being formally established in 1985. The Park comprises a total of 32,000ha. In the flower season an additional area is open to the public. The area has also had some Norwegian influence in a whaling station that was in operation between 1909 and 1930.

After a quick look at our map to decide our route (there aren’t really that many options) we headed for the first bird hide. Here we spotted the Sacred Ibis, the African Spoonbill, and the Yellow Canary amongst others. The hide is a lovely place overlooking a watering hole, with informative posters of the main birds that can be seen there. The hide is also next to one of the accommodation options that are available in the park, Abrahamskraal Cottage. This cottage is built in true Cape Dutch style which makes it blend in nicely in the terrain, even though it is bright white. From the hide we continued on the road past Johanne’s Beach Cottage, ending up at the braai area at Preekstoel (probably some Norwegian influence in that name). 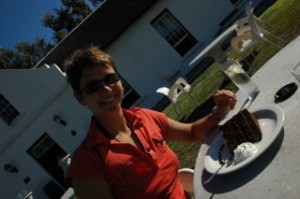 We had already had our lunch before entering the park, but decided to try out the acclaimed restaurant at Geelbek. On our way there we spotted both Kudu and Eland, and added the Cape Spurfowl and the Hartlaub’s Gull to our list. At the restaurant we bumped into a family of Swedes (they are never far away), as we ordered our very decadent and gigantous pieces of Chocolate and Red Velvet cake. A short walk from the restaurant there are two bird hides on wooden walkways stretching into the lagoon. These are perfect places to watch the wading birds, especially the Lesser and Greater Flamingos, the Common Greenshank, and the Little Stints. Overhead, it is also easy to spot the White Throated Swallows as they circle around looking for insects.

Leaving the restaurant we headed towards the Langebaan Gate, meandering our way above the east side of the lagoon. Although the Park also promises Zebra and Caracal they were very camouflaged when we were there. We did, however, spot the Rock Kestrel and quite a few Ostriches on the way out.

This entry was posted in National Parks, South Africa. Bookmark the permalink.