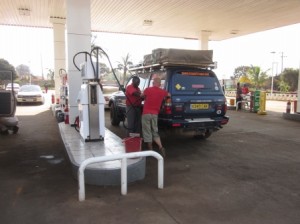 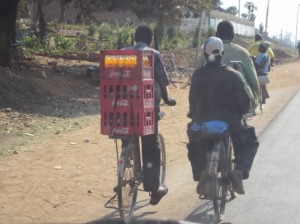 After crossing the border into Zambia, we very efficiently took care of the chores we had to do: shopping at Shoprite, over to the bank to draw some Zambian Kwacha, into Spar for very last provisions, Highway suprette for coke, fuel station to fill up (20p a litre cheaper than in Malawi) and a stop at Afrox to fill cooking gas.

All achieved (except for gas) very efficiently, and we arrived at Mama-Rula campsite to set up camp for the night.  On entry, we were greeted by a large overland truck (which we had seen in Chipata) with occupants setting up their tent city.  We headed over into the far back corner – as far away as we could – and settled in.  Our first few surprises followed: 3 more overland trucks came in … and then a group of 3 German Land Rovers with about 12 people (drivers, cooks, clients).  In total, about 70 people camping that night!  Tent city as far as the eye could see. 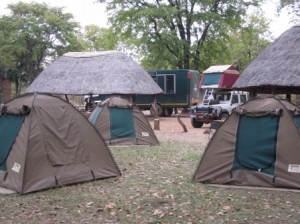 Then, just when we thought no more people were arriving, we had our next surprise.  Noel and Ping – who we manage to bump into regularly on our trip – arrived in Pegasus, their 4×4 Iveco van!  It was amazing to see them again and catch up on their travels.  We last saw them in Windhoek, Namibia in late May.  They have been travelling in Botswana and Zimbabwe, and were traversing Zambia from Kariba Dam to Malawi.  After Malawi, they’ll be heading up the eastern side of Tanzania towards Niarobi, Kenya. As we are heading towards Lake Tanganyika and the western side of Tanzania, it is unlikely we’ll cross paths again.  An extra special surprise. 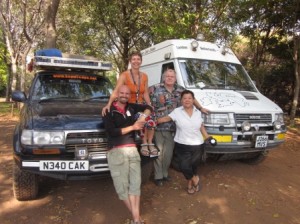 Next morning we were again surprised.  After a heavy night of karaoke for the 50 or so super-keen overlanders, we expected them to have a slow morning easing into the day.  Not so.  When Viking Explorer emerged from the ten just before 0700, he was greeted by … an almost empty campsite!  Only 1 truck and the German tour group remained.  Astounding.

So, after a truly surprising day, we bid a fond farewell to Noel and Ping and set off in search of backroads, offroads, gravel roads in the Luangwa valley.

2 Responses to What a surprise!