Wow, that was close…

Posted on December 26, 2012 by African GirlChild 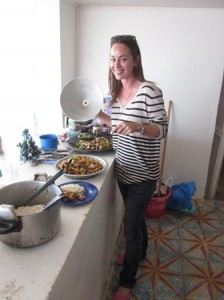 Wow, that was a close call… we almost ended up becoming residents of Dakhla!

After checking out all the camp sites at Dakhla we chose to stay at Camping Moussafir. Not because it has the best views, but because it has electricity – important since we were planning to stay for a few days. We settled in, and decided to go for a walk as we had been driving solidly for a few days. In the distance we spotted an interesting vehicle, and decided to check it out. We were invited in for a beer, and ended up spending the rest of the afternoon with a group of newfound international friends. Just as we were about to leave, we were invited to lunch the following day, which we happily accepted. Lunch expanded our group of new friends, and we had a lovely afternoon eating juicy burgers and home grown salad.

At this point we had also become best friends with our French neighbours at the campsite. It is a hard life some of them live… 2 months in Dakhla in a luxury campervan with a quadbike attached (or in a huge bus with a Smart car inside), with a massive satellite dish to ensure golf can be viewed on the flat screen TV. The rest of the year is spent in Cannes playing golf and driving the Ferrari… But our neighbours were very friendly, served us French wine (because we weren’t allowed to eat lunch without wine!), and we really enjoyed their company.

The next day we went into Dakhla to do our shopping. We were offered a lift by Chrystal (Swiss) and Francesco (Italian) in their home, a small Citroen campervan. They spend most of their time in Tarifa (Spain), but head south during the colder winter months.  Our shopping was done in the souk, followed by a fresh fish lunch at a local restaurant. This happened to be Christmas Eve, and African GirlChild and I enjoyed our Christmas dinner at the campsite, listening to “I’m dreaming of a white Christmas”, with our Christmas tree hanging from the tailgate. Slightly surreal, but very nice. Christmas dinner (of beef stew) was completed with a big slice of home baked Christmas cake brought all the way from the UK. Christmas Day we were invited back our newfound international friends for lunch, which had now expanded to 8 people from 8 different nationalities!  We were made to feel so welcome, and really did feel like we were amongst family.

So, back to the residency question: Dakhla is an easy place, especially when you know someone who is local. We were grabbed by the hospitality of the people we spent time with, and their easy-going chilled-out attitude. It was very easy to say yes to staying another day, and then another day, and it would have been so easy to wake up in Dakhla in two months time being completely part of the place. Reluctantly we bade them all farewell, but with fresh anticipation of what we would encounter as we continued our journey southwards.  We look forward to seeing them again – inshallah.

This entry was posted in Morocco, Western Sahara and tagged Christmas, dakhla. Bookmark the permalink.

4 Responses to Wow, that was close…